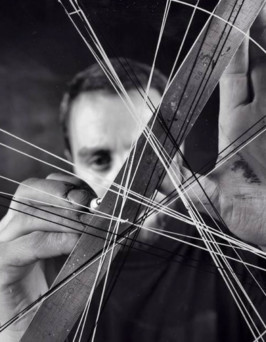 Thomas Canto was sensitized to art at an early age by his entourage. His work is eclectic and abstract, resolutely turned to a futuristic aesthetic.

In 1990, he painted his first works, inspired by abstract masters like Moholy-Nagy. Self- taught, he tries different techniques, such as oil painting or photographic tools to create his identity. Confronted with his taste for abstraction by the study of the Constructivist and Futuristic currents, Thomas Canto obsessively digs the subjects of the representation of speed and perspective that are found in all his compositions.

He began to exhibit his work from 2001 onwards. In 2005 he had his first solo show, where he was able to initiate work in situ and to deepen his work on the notion of space through immersive installations.

In 2013, he participated in the artistic project “Bains Douches”. The freedom of expression he finds in this new environment suggests to him the total appropriation of a place and its space. It is at this moment that he defines the concept that will structure all his future productions: the relation between Man and Architecture. Following his curiosity for the technique he takes inspiration from the works of the architects Zaha Hadid, Jean Nouvel or Oscar Niemeyer.

Since 2014, he specializes in high-precision geometric creation, whose explosive movement exudes a deep tension. He decides to include his paintings in volumes of acrylic glass that he invests as so many windows open on his work. Pursuing his appropriation of matter, light and especially the shadows that it projects, he gradually adds interlaced nylon to his “cubicles” of Plexiglas.The product of this multidimensional experimentation was presented in Geneva during his exhibition “Transparent Landscapes”. He also exhibited several installations in the former Customs of Rome (2014), Bund 18 of Shanghai as part of the exhibition “Look Through” (2014), at the Biennale of Volklin- gen (2015, 2017) as well as at the Museum of Modern and Contemporary Art Mohammed VI in Rabat (2015). In his exhibition “Still Lifes of Spacetime”, Rome (Italy), Thomas Canto presented for the first time a staging of videomapping, a promising new medium. His installation was reviewed by the critic Achille Bonito Oliva who wrote the manifesto of the event.

In 2016, he created artworks which foreshadowed his evolution towards a production of a stronger sculptural dimension. More recently, light and optics have become the core of Thomas Canto’s work. The exhibition “Gravitational Transparencies” presented at Matthew Liu Fine Arts space in Shanghai reflected the many possibilities offered by the play of light reflections and the resulting impressions of infinity. He continued his researches on transparen- cy with the installation “Illusory Perspectives” presented at the Centre Pompidou for the 40th anniversary of the museum.