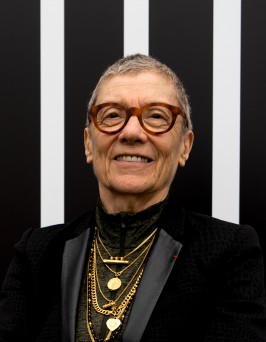 Her practice and artistic vision mark a clean and open break and she has liberated herself from all art movements through her gesture, which is as radical as her whole body of work. As a matter of fact, she publicly burned all of her paintings during the May 1968 events.

From that moment on, she became an outsider, a free spirit, emancipated from any kind of trend.

Her praxis goes above and beyond simplicity, it is endless. Nurturing her work with the contemporary reality, she responds to whatever she experiences, whether it is art or history, conceptual art or even injustice. She has been a pioneer, regardless the medium or the space that she had decided to explore. In 1970, her Initiation Rooms had a strong influence on La Monte Young, who decided to improve his Dream House after getting to know her work. Then, in 1977, City Performance n°1 takes over the public space as a site for critical thinking and rebellion: the font overran the polis, the language takes over the city.

Dealing with humanism, environmental issues, feminism and decolonization, Tania Mouraud’s own battles are reflected in some of her pieces, such as Black Power (1988-1992), Black Continent (1991-2015), and more recently in her photographic series, like Balafres (2014) or Desolation Row (2018). One can feel the struggle for life, for dignity, for world peace and for the sake of humankind. Her works are a result of a pictorial quest, far from any classic or established painting technique. Her quest manifests throughout her entire body of work, even in her most recent video productions: Fata Morgana (2016) and Pandemonium (2015-2016)

Over the years, her career has been significantly marked by many solo exhibitions in France, including some of the most recent ones: Exhausted Laughters at Saint-Etienne’s Musée d’Art Moderne in 2014, Ad Nauseam at MAC/VAL (2014), Une pièce de plus at Tour’s CCC in 2010 and Roaming, at the Musée de la Chasse et de la Nature, in 2008. Her work has been recognized internationally and it has travelled to Bucarest, São Paulo, Philadelphia, Saint Petersburg, Los Angeles, Barcelona, Toronto and London.

In 2015, the Centre Pompidou-Metz presented a major retrospective of her art, honoring in this way a lifetime of artistic achievements.