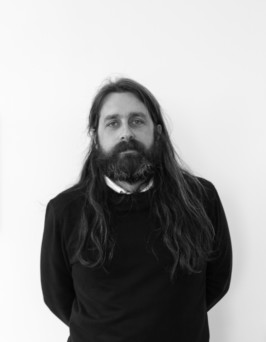 Born in 1972, Olivier Kosta-Théfaine describes himself as a “landscape painter”, exploring the city from its margins. When he moves through the urban space, he is looking for all those things that we don’t notice. In his determination to redeem all those elements, considered uninteresting and charged with connotations, the artist takes our inextricably tied power relationship with the city, and brings the poetry back in as a scenery. His detail-oriented nature channels his movements and feeds his own image gallery. Considering himself a mere creature of the city, he plays and downplays with clichés and transforms common references. Classic elements are distorted through “cheap vandalism” techniques. So, when he creates a burnt sky using a cigarette lighter on all the three domes of the Palais de Tokyo, drawing inspiration from Italian palace frescoes, the graffiti on the ceilings of his teenage years echoes the Renaissance paintings.

As a self-taught artist and a former fellow at the Villa Medicis (2016-2017), his work has been exhibited at the Palais de Tokyo (2016), at the Abbaye de Maubuisson (2012), at the Fondation Cartier (2009), and has entered the Essone’s Departmental Contemporary Art Collection (2013), as well as the Municipal Contemporary Art Collection of the city of Paris (2011), among many others.