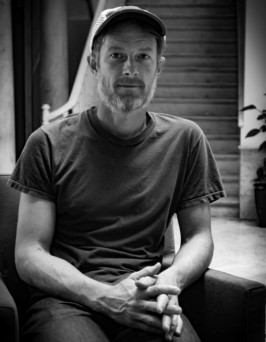 Born in 1974, in San Francisco, MOMO has a unique path. Unlike most artists working in the public space, it is not through graffiti that he was drawn to urban art, but through his extensive travels. The first of them, in 1991, led him to spend a whole summer in Europe. Purchasing an Interail pass, MOMO traveled throughout the United Kingdom, France, Germany and Spain. He discovered free parties on the rise. The DIY side of the rave culture, as well as the abstraction of electronic music, would later have an influence on his work.

Back to the States, young MOMO went back to high school and followed an Art program with mixed conviction. “I felt isolated because of my education,” he says. “But I was very curious about the world around me.” In 1994, instead of getting into college, he went back on the road again, heading for New Mexico this time. While there, he met the artist David Barbero, and started working with him. The journey is rather frugal: MOMO traveled by hitchhiking, carrying nothing but a backpack, and slept in homestay accommodations. To provide for himself, he made watercolors of landscapes and portraits sold door to door, on the very spot where they were painted.

Back in San Francisco, he attended a course in computer programming for a year and a half, and then dropped out before the end of the program. His appetite for traveling was far from being satisfied. So, in 1999, MOMO went back to Europe and lived in Andalucía for a year. ” In terms of urban art, Europe was living its golden age, which was out of all proportion with what was happening in the United States at the same time,” he explains. Artists had a more social and political reasoning for painting.” While traveling the Caribbean (Jamaica, Grand Cayman, Turks and Caicos Islands…), he also discovered another mural art tradition: the Afro-Caribbean decorative painting traditions which are often highly abstract and expressive.

These diverse experiences nourished his own mural art practice, even if at that time it was mostly paced by commissions for advertising walls and sculptures, all of which financed his travels. They also led him towards an abstract approach of creation, a practice he developed shortly after moving to New York in 2004. Amid a post-9/11 psychosis, MOMO was soon to abandon all verisimilitude and embark on a series of nearly conceptual works. After creating “the world’s largest tag” in the shape of a long ribbon of paint stretched across the streets of Manhattan, he turned his attention to a series of abstract collages made of colored paper. “It was different from what we were seeing in the street art scene at that time,” he says. “Street art was mostly figurative work at that time. My collages were easy to identify because they stood out.   I thought that by displaying abstract works in the street, it might intellectualize the scene a bit. It was also a way of steering clear of the manipulative propaganda mess which was everywhere, pushing my country to war in 2004, advertising emotion over reason.”

His collage pieces soon turned into the MOMO Maker, where his computer skills and his enthusiasm for the Open Source culture converged. The posters he created in this context are in fact designed on a computer, using GIFS in endless variations according to the principles of generative art. In 2008, MOMO’s taste for abstraction and randomness also resulted in several kinetic sculptures in collaboration with French artist Eltono, placed in NY water ways as the PLAF project.

From 2010 onwards, MOMO has focused on a working method that he calls “Practical Geometry”. Using tools developed and adapted, he has created abstract compositions on large walls in which he juxtaposes composite forms and textures with a digital effect. He has explored this approach in several commissions and festivals – Fame in Grottaglie, Italy (2010 to 2012), Bien urbain in Besançon (2012 and 2013), Open walls in Baltimore in (2012)… – but also in solo and group shows. For instance, in 2016, he participated in the MIMA opening exhibition, “City lights”in Brussels.

He also develops his working methods in the studio. Having recently moved to Florida, MOMO now devotes himself almost exclusively to his work on canvas, which allows him more time for further experimentation. This is ideally suited to an extraordinary artist, who is impervious to changing fashions and dominant aesthetics.