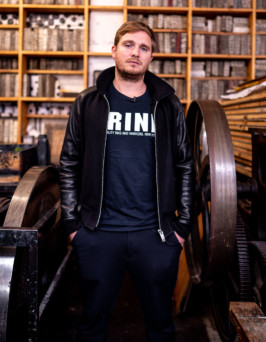 Since 2013 Nicolas Couturieux has worked as a curator, as well as a producer, editor and programmer.

He initially specialized in limited edition lithographs. With a focus on urban art that penetrates the world of contemporary-art, the publishing house that he co-founded benefits from the experience of its collaboration with the prestigious Idem Paris, the oldest printing house in the city. Founded in 1880, the house once printed the work of Matisse and Picasso, and today produces work by the biggest contemporary artists working today.

Collaborating with various institutions, Nicolas Couturieux has curated exhibitions on an international scale. He also took a stance in 2015 against the tragic events that took place in France, with the help of the newspaper Libération and the Palais de Tokyo, raising thousands of euros to help finance programmes that defend the freedom of the press, led by the NGO Reporters without Borders.

Since 2017, Nicolas Couturieux has collaborated closely with the Rouen-based art centre Hangar 107, managing their programming with the aim to confront the world of contemporary art, inviting pioneering artists to occupy the public space. He is uncompromising about the importance of the convergence of research and goals, giving way to an unencumbered, utterly free artistic production that smacks of its time.

Having founded SIX PM, specialised in consulting and events, he went on to create his own agency, more in-line with his personal philosophy and ambitions, through which he assists various artistic projects that are dear to him in France and abroad, highlighting and helping to uncover their unique depth. He seeks to situate such projects within their art historical context, producing multiples and catalogues which gather together theoretical writings in an attempt to render their messages accessible.